As football season is here, finding an affordable hotel close to the City Centre and local attractions can sometimes be a tricky job. But now cheap hotel stay in Salford Quays is much cheaper than you have ever expected.

Manchester is an exciting and colourful city with so much to offer. World –famous for its beauty, sports also a top-notch destination for music lovers and those who love to soak up the nightlife. Rich in culture, the city has fascinating museums and galleries to explore, not to mention the excellent high street, designer and vintage shopping throughout the City Centre, and a number of countless tempting restaurants to cater multinational cuisines.  Also, when it comes to accommodation, there are many Cheap  Hotels in Salford Quays and Manchester. 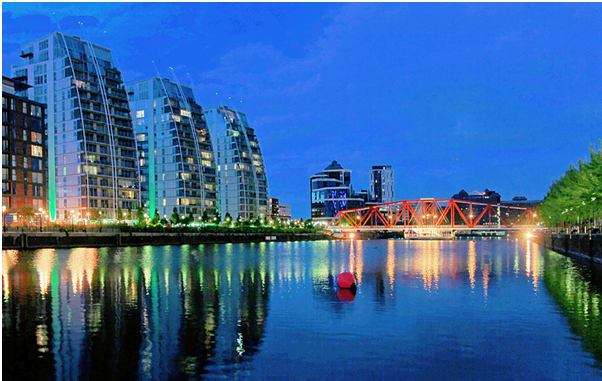 Staying at a good hotel with all the comfort and luxury and that too at a cheap price is what turns us on. Many people have a great wanderlust. They have a desire to travel and rove about, saying yes to new adventures; want to go to different places and simultaneously saving money at hotels. With this thought in mind, if you are planning to visit Cheap Hotels in Salford Quays, there are uncounted numbers of cheap hotels. If you don’t feel like paying a huge amount per night for a room, then, there are many budget hotels available in Salford Quays.

Manchester is also called northern powerhouse that could take on the world. Also, now there is the political will to devolve more power and address the north-south economic imbalance. Research reveals that from the list of the UK’s ten most populated cities aside from London, Manchester is the public’s top choice’s to be the UK’s second capital. Manchester is chosen by 30% as the city to rival London, well ahead of Birmingham.

George Osborne from conservative government has signed off a £235m institute for advanced materials research to be based in Manchester, and the city will get a £78 m theatre and arts venue on the site of the former Granada TV studio, which will host the Manchester international festival.

People from across the world visit Manchester for many reasons. Hence, whether you’re off on an escape, a night out, or a football match, don’t spend more than you have to; hence book our cheap hotels Salford quays surrounded by Manchester United and media city Salford.

Book your stay with us at our serviced apartments Manchester

Alternatively, send us a message through our contact form and one of our staff members will get back to you as soon as they can!